Dirk Jan Jager is a visual artist working in a variety of media. He began his career as a painter, and in his performance work he still approaches painting from unusual perspectives. In many of his performances the living surface of the body is defined as a site of intervention. It becomes a blank canvas, yet its surface does not exactly receive, or host, images.

Jager alludes to motifs from painting or mythical figures to stage the body, allowing the familiar image to act as a second skin, which in the course of the performance is gradually peeled off, to reveal an anonymous, generic body. A central element in his work is the gesture of erasing identities, and images that support them.

Another aspect of his work is the interest in rituals and rites of passage, and transitional states that give birth to a new person, within a performative situation which involves the covering and peeling off the full surface of the body with different materials. 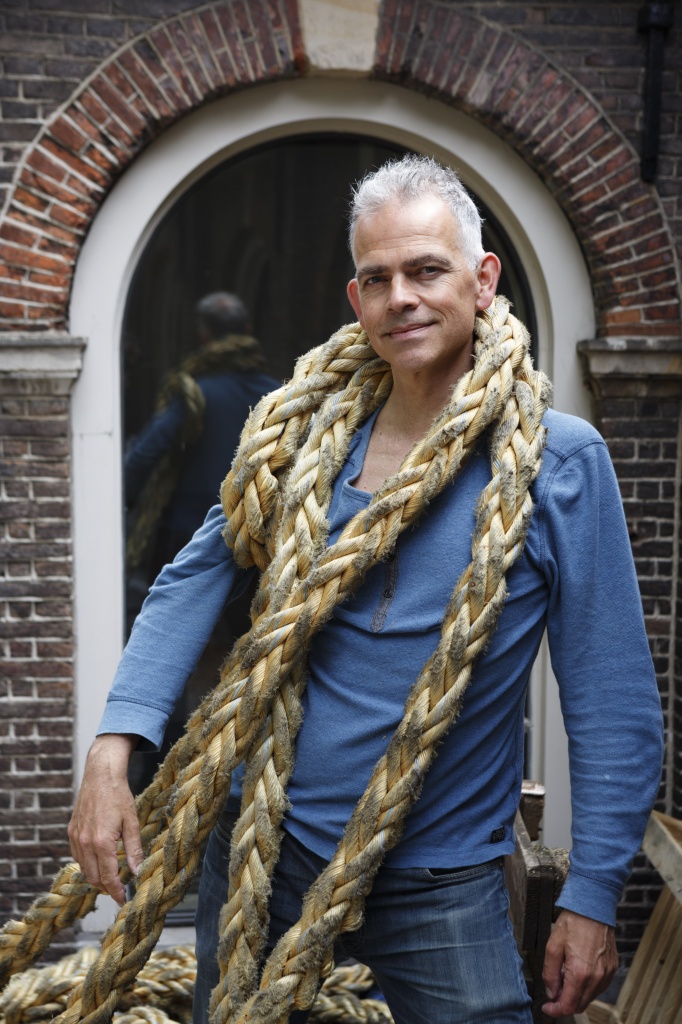 Youth work: 'Punk' (1981) painted in my bedroom. I was 15 and afraid my mother would make comments on my painting like: Is that who you want to be? So I closed the door while painting and let it dry on the top shelf. It was my secret project and I only showed the result when finished. It became one of my mom's favorites ...

Punk was relatively new at the time and I tried to make a portrait of this new culture in an oldfashioned way, the style of the Dutch Masters. Of course I failed. I had no particular model in mind, wasn't looking at anyone. Was it an imaginary self portrait? i tried to work with 'claire obscure', the extreme light and dark effects in some classic paintings. In this light a contemporary man becomes visible.

I had no particular model in mind, wasn't looking at anyone so perhaps it is an imaginary portrait, a compilation of observations and experiences.

He wears make-up: black lipstick and eyeliner. He dyed his hair white on one side and black on the other and he has a mohawk. A flea collar around his neck. Fluorescent green fake fur is glued on his leather jacket with studs, zippers and safety pins.

One of his buttons shows a bleeding Dutch flag, the symbol of 'Hollanditis'. This term was coined by the American historian Walter Laquer to describe the wave of pacifism that swept through the Netherlands and other European countries. It was a response to confrontational politics, a protest against cruise missiles, in particular neutron bombs.

The graffiti in the background refers to more local themes such as 'Debiele Eenheid', 'Wanda's' (first all-women punkband in the Netherlands) and 'Parkhof moet blijven'. Parkhof was a squat in an abandoned school in the Victoriepark. The city government wanted to demolish it, therefore I took part in a parade to the town hall to "demand" the preservation of Parkhof. Our wish was granted and Parkhof served as a pop venue until 2009. Then it became a haunted house and now it's a fancy restaurant.

I think my Punk painting should hang in this restaurant as a tribute to those who preserved this unique venue and my mother is going to offically hand over the painting! 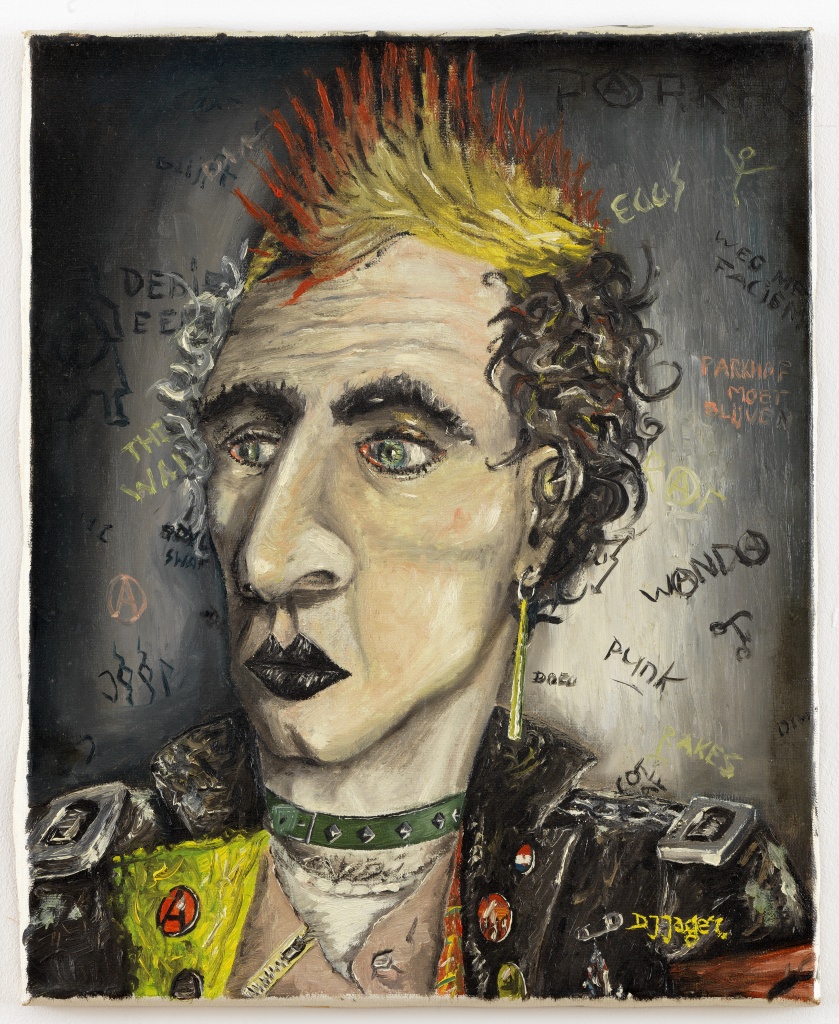 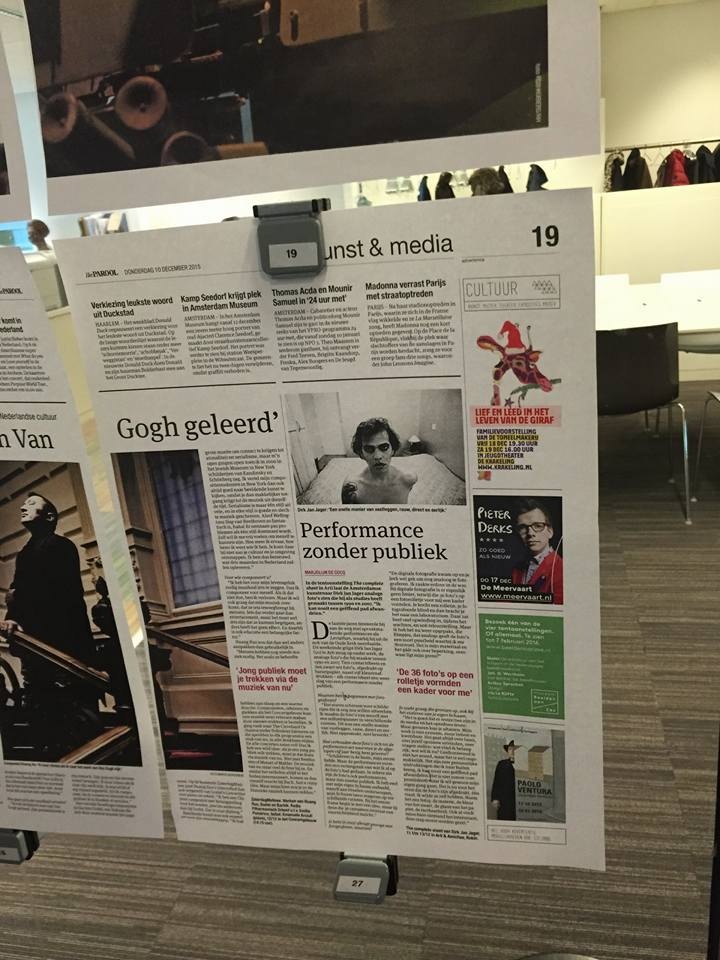 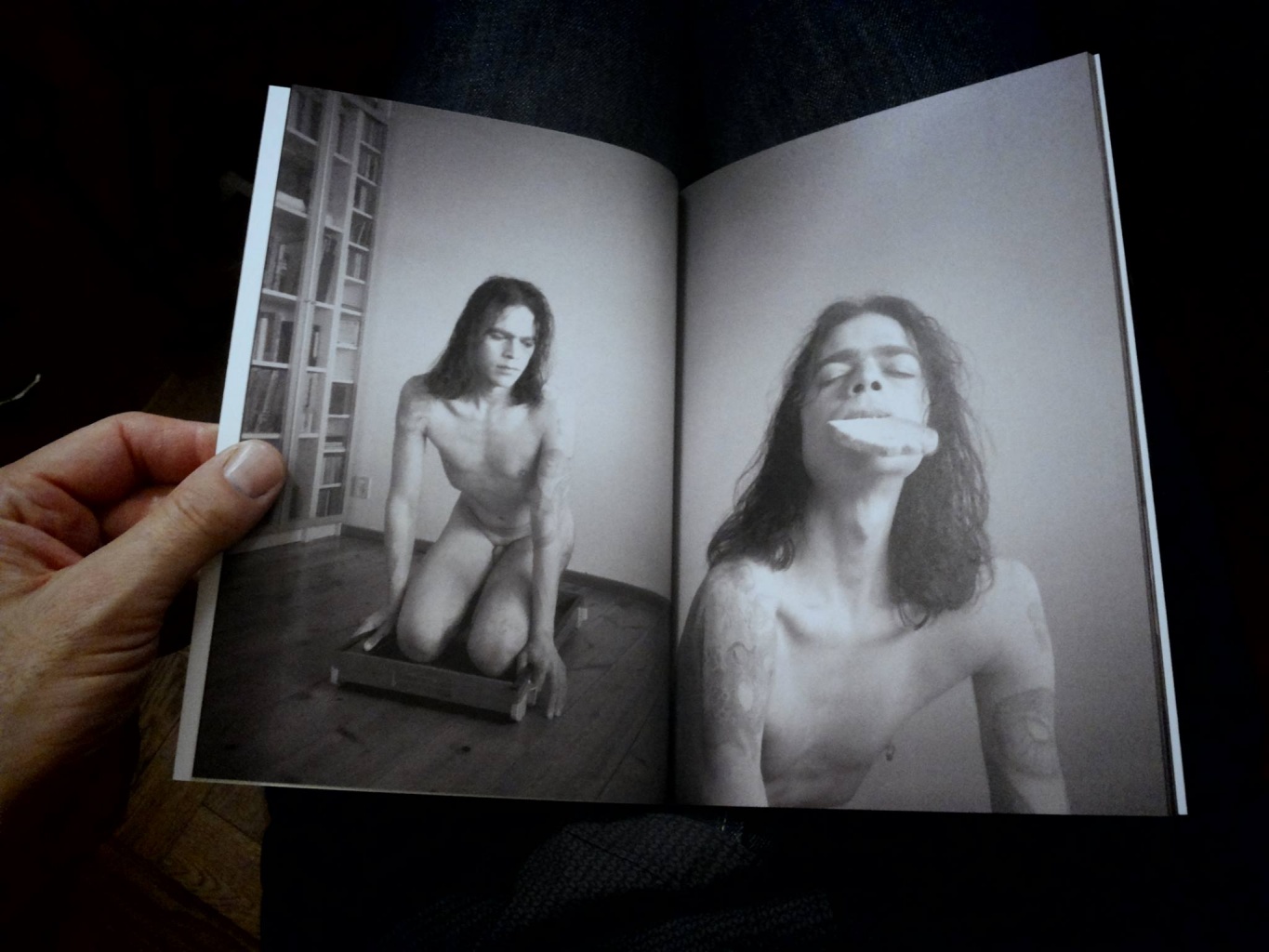 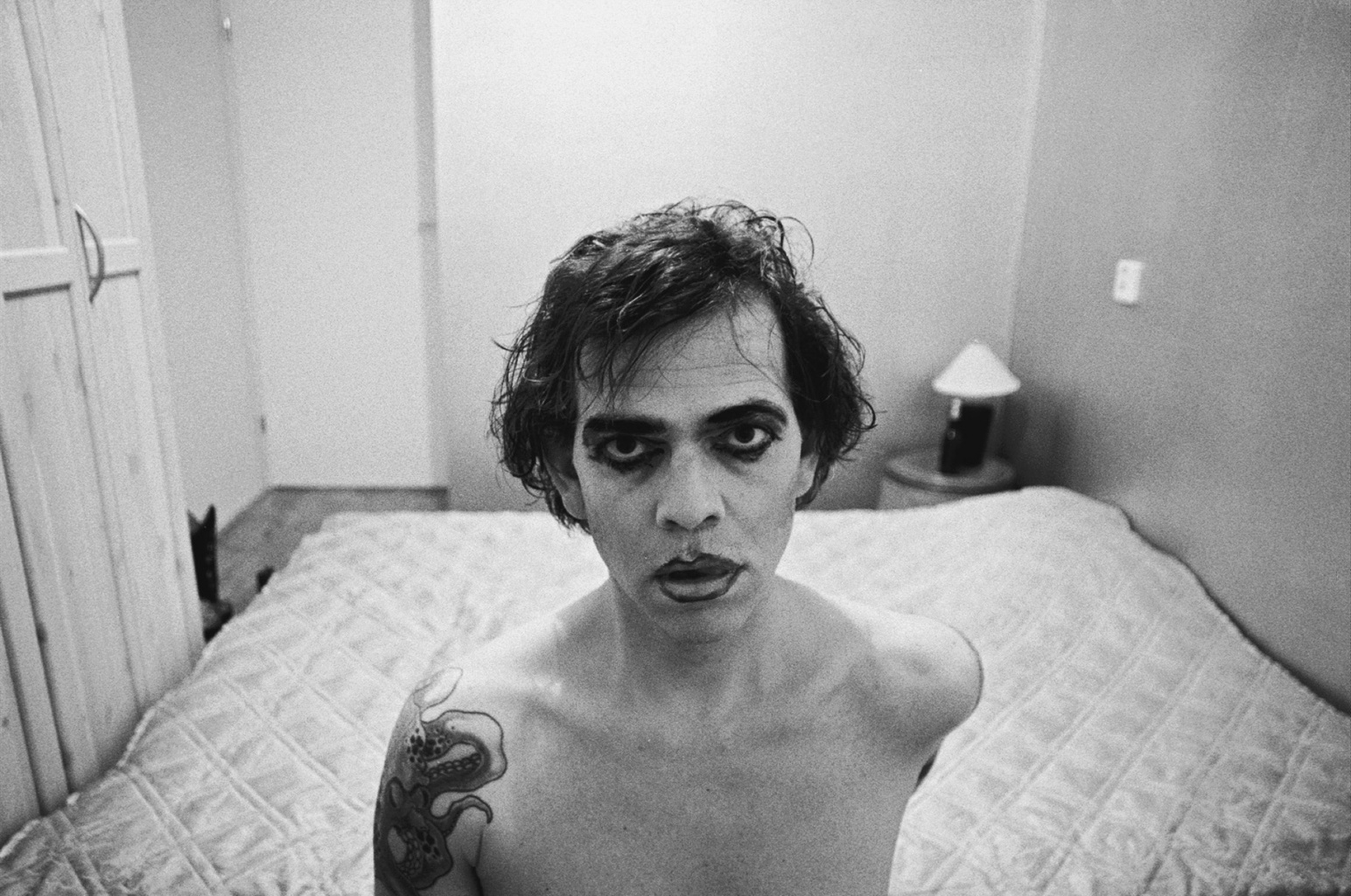 In Phagosytosis an artist and a dancer create a compelling performance where, each contrasting with the other, they alternate between passive and active states of mind and behaviour. It is a performance in which they investigate the boundaries of what one person, when given consent, can do to another's body. The perspective switches continuously. How can what seems passive suddenly appear active? 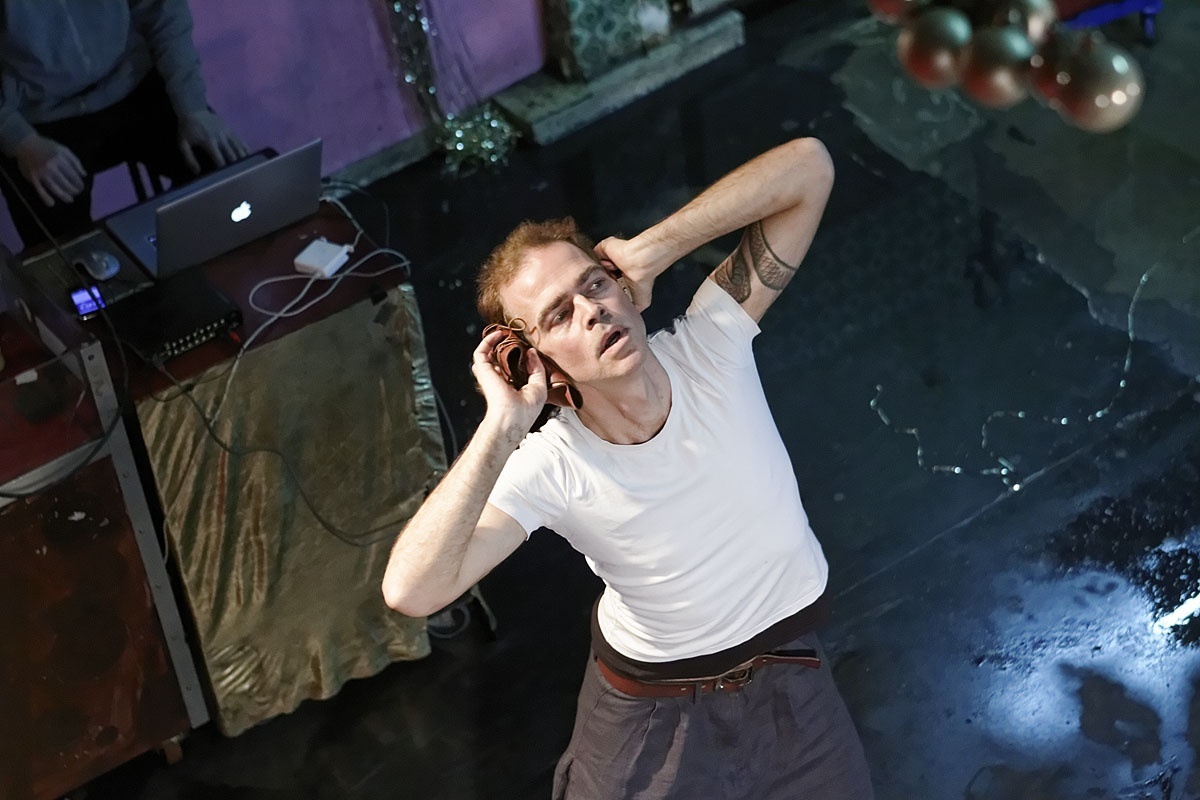 bed peace
Was it the birth of our son or the splendid sunsets right in front of our house that gave inspiration for this photo? And is there a reference to John & Yoko or rather to Joseph & Mary? I used a self-timer. Naturally it's difficult to direct a toddler, and I did not want to direct him. I believe in natural behaviour and then see what happens. I bought him a candy roll of Fruittella, as a focus point. And to my surprise, while the self-timer was counting, he stuck the candy roll with wrapper and all in his mouth. Our son is a born actor ... 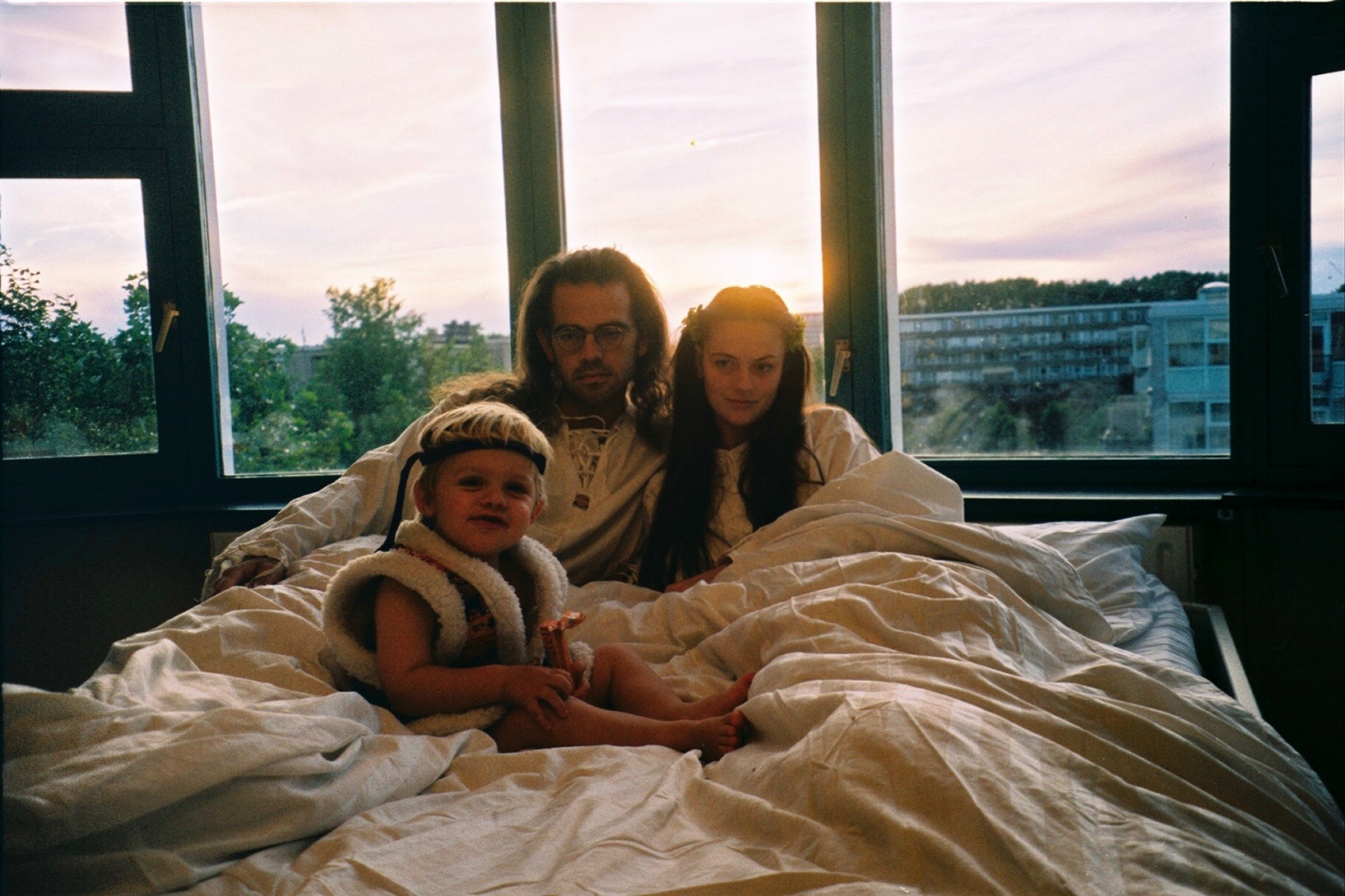 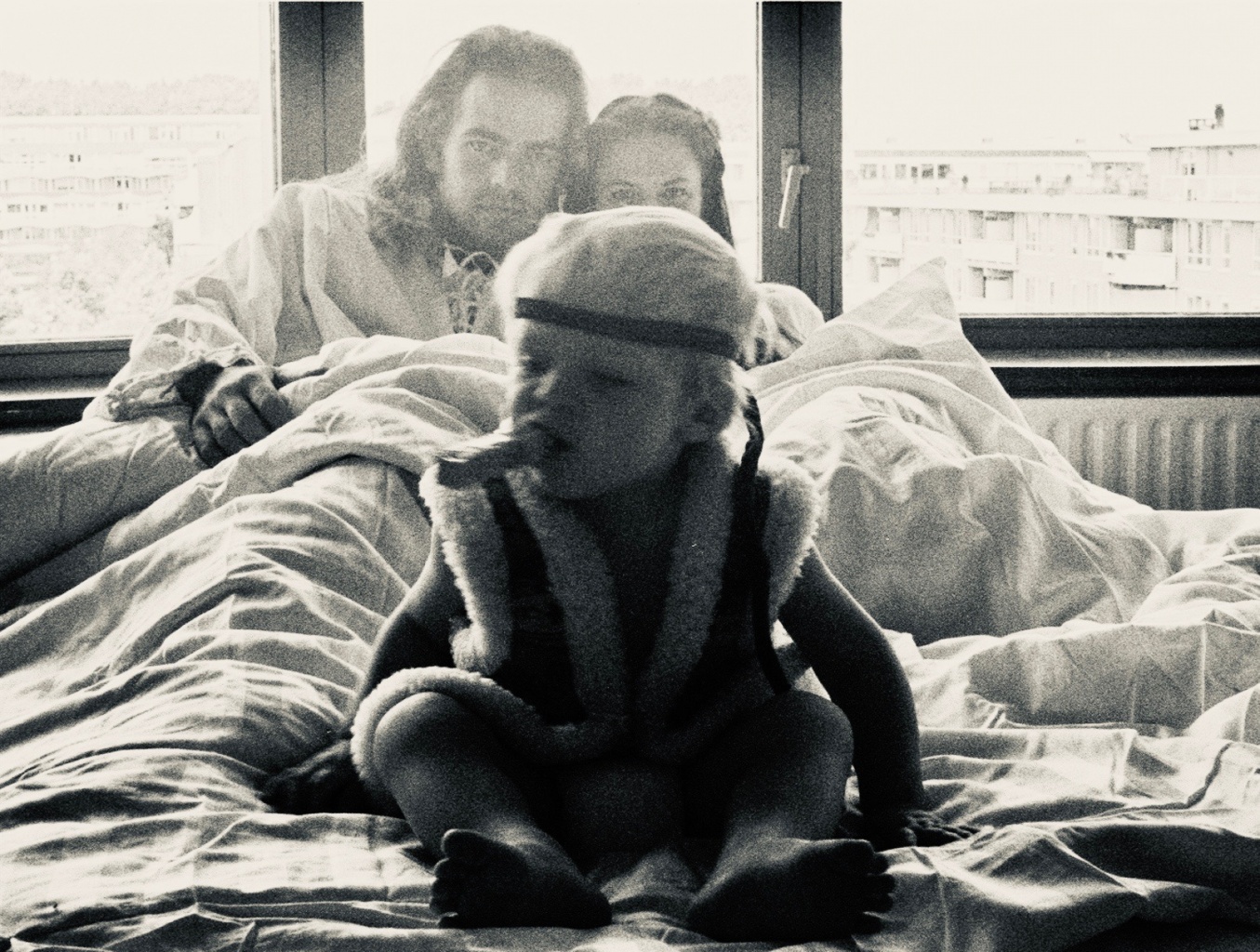 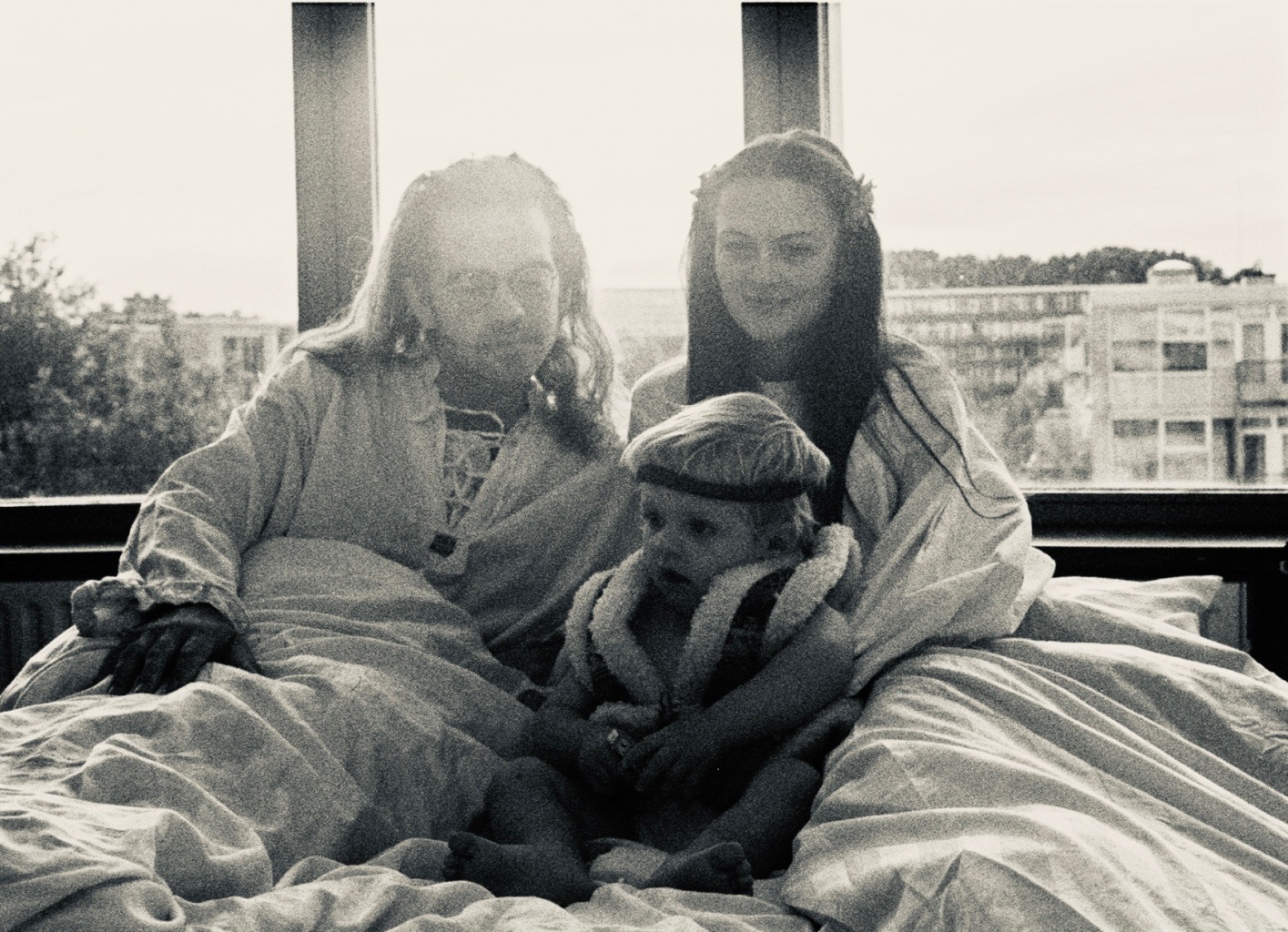 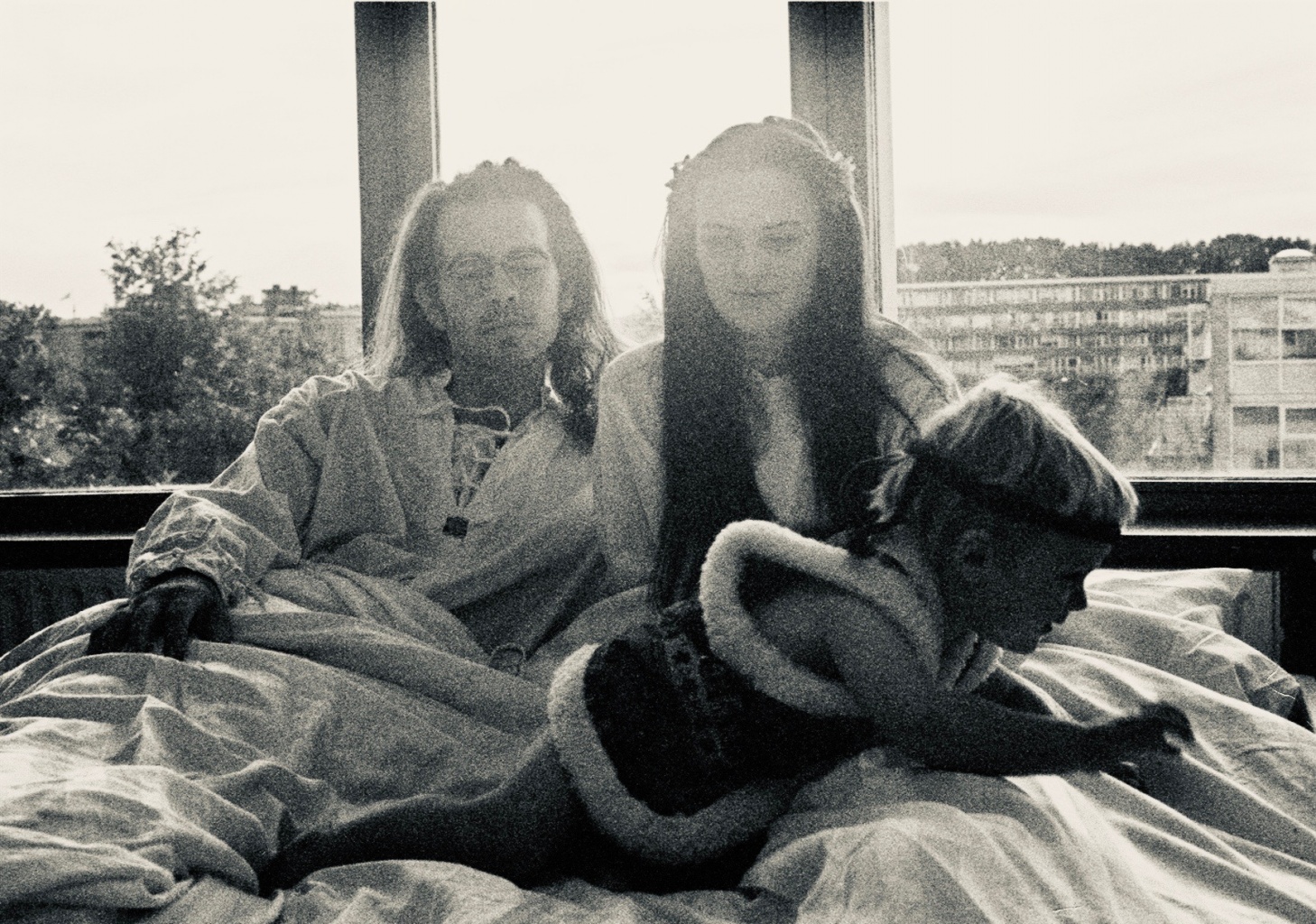 Dirk Jan Jager is best known for his work as a painter, however at the invitation of the organizers of MIP2, the Brazilian international performance art manifestation, he staged a new performance work Wax Latex Mud.

This new work extends an ongoing investigation into the body as an extension of Jager's painting practice: in which he stages himself as the Anonymous Body. This body aims to exist in a state of neutrality equivalent to that of the fresh canvas or the white cube.

Of course the body is never entirely anonymous and thus through the work itself and the gaze of the viewer mediated by the artist it becomes a site of transgression.

Previously this work existed as closed performances, the artist alone with a camera caught in closed circuit anti-narratives. With Wax Latex Mud the action goes public, the physical enclosure regulated by the aperture of the camera mechanism removed. Time plays a significantly different role in this work, along with the actual presence of audience duration and endurance enhances the vulnerability of the body.

Over three consecutive nights the artist undertakes a journey of transformation. Though this process recalls in some respects Joseph Beuys’ tale of rescue by Tarter tribesmen, Jager's action connects directly to the history and culture of the country where the work unfolds. First he undergoes a full body depilation or Brazilian wax, the ritualistic action is then repeated over the following nights using first liquid latex from the Pará rubber tree Hevea brasiliensis, and finally clay.

At the beginning of each stage the artist appears in a suit, which was cut off of him by assistants, although these sometimes very painful actions of stripping, burying and coating can be seen as reminiscent of universal Jungian warrior archetypes found in Africa, Asia, the Americas and the European ancient world, Jager refreshes and subverts them with an intense presentation of a hyper-vulnerable Artaudian body without organs: in a disused building, traffic humming through the warm night in the middle of a bustling Brazilian city on the equator, called Beautiful Horizon.